This is a sharpie sketch of Fender Custom Jazzmasters belonging to Steve Klein, former guitarist for pop punk outfit New Found Glory. I was very inspired to create this band art piece for Steve since I love his guitars, I love New Found Glory, and I felt like sharing my creation with Steve. 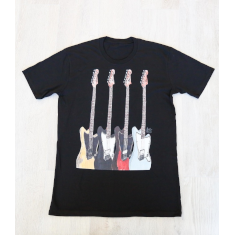 This piece of band art captures the images of each Fender Custom Jazzmaster belonging to Steve Klein, former guitarist for pop punk band New Found Glory. When I saw the type of guitars that Steve played when he used to be in the band, I thought to myself, “Wow those guitars look pretty cool! I wonder what they are and how he got them. I wish I had one.” After looking at several images of Steve playing his guitars online and closely examining each image, I concluded that the guitars he was playing were Fender Jazzmasters due to their body shape, along with noticing the words “Fender Jazzmaster” written on the headstocks of each guitar. The most interesting thing about them, unlike any traditional Fender Jazzmaster, was the way they were configured. Each Jazzmaster was configured with one humbucker bridge pickup, one volume knob, a hardtail Stratocaster bridge, and a side input jack. Due to their configuration, I knew they had to be custom-built, however I wondered who built them. I eventually learned that they were built by Billy Siegle, artist relations manager at Fender, who also built Taylor Lumley’s custom Jazzmaster, after I compared both Steve’s and Taylor’s Jazzmasters side by side and noticed tons of similarities.

The reference image used for this sharpie sketch was from Steve’s Instagram (@steveisthereason) and the Instagram post was from 2010. However, the exact location of where the photo was taken and posted is unknown.