This is a sharpie sketch of My Chemical Romance bassist Mikey Way’s custom-built Mustang basses that he played during the era from the band’s album Danger Days: The True Lives of the Fabulous Killjoys, which was from 2010 to before the band disbanded in 2013. Mikey used the silver sparkle bass for songs in standard tuning, and used the red bass for songs in E flat (E♭) standard such as “Bulletproof Heart”, “The Only Hope for Me Is You”, and “Party Poison”. These basses have a shorter scale length than most basses Mikey has played while in the band. 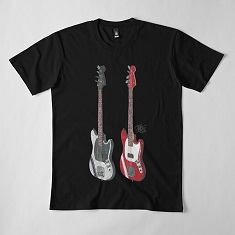 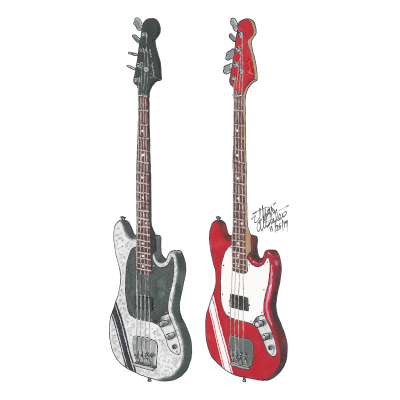 This piece of music art captures the images of these Mustang basses that Mikey Way has played during the era for My Chemical Romance’s album Danger Days: The True Lives of the Fabulous Killjoys. He mainly played these basses on The World Contamination Tour from 2010 to 2011. Unlike regular Mustang basses, these basses have diagonal pinstripes over the forearm contours on the body, as well as single EMG HZ passive humbucker pickups. Plus, the red bass has a matching color headstock. If you notice on the silver Mustang Bass, the neck has a black gloss lacquer finish on the back, unlike the red Mustang Bass which has a pure maple finish on the back of the neck. However, it is unclear if the back of the neck on the red bass has a clear gloss or satin finish.

In fact, these basses are very similar and look as if they were based off the Justin Meldal-Johnsen Road Worn Mustang Bass signature model since they have the same type of bridge, as well as the structural feature in the body which allows the strings to be strung from underneath, creating more sustain. It is possible that Mikey Way based the model of these basses off the Justin Meldal-Johnsen signature model due to common similarities.

Overall, these are the Mustang basses that Mikey Way has played during the era for My Chemical Romance’s album Danger Days: The True Lives of the Fabulous Killjoys.