This is a sharpie sketch of My Chemical Romance bassist Mikey Way’s basses that he played during the era for the band’s album The Black Parade, which was from 2006 to 2008. Pictured here from left to right are a black Deluxe Jaguar Bass, a silver American Standard Precision Bass, and a black Geddy Lee Jazz Bass. 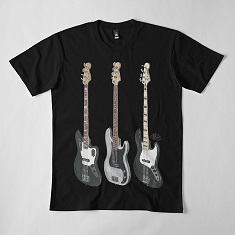 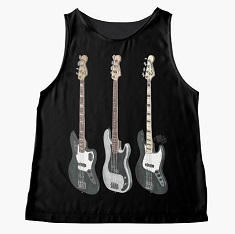 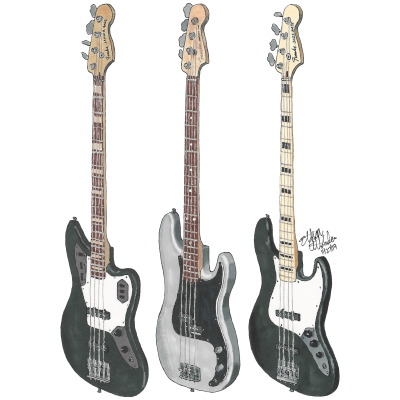 This piece of music art captures the images of these basses that Mikey Way has played during the era for My Chemical Romance’s album The Black Parade. He mainly played these basses on the band’s The Black Parade World Tour from 2007 to 2008, and even before then in 2006 which was when the album was released.

The bass on the left is a Deluxe Jaguar Bass. It has abalone block inlays between certain frets on the neck. It also has two single-coil bridge and neck pickups like a regular Jazz Bass. However, what makes this bass different than a regular Jazz Bass is that it has one volume knob and one tone knob, since Jazz Basses usually have two volume knobs and one tone knob. Plus, it has a bunch of control switches on certain areas of the pickguard, which allow for change in sound frequencies. Plus this bass has active/passive preamp system that changes the pickups from passive mode to active mode, allowing for more boost and punchiness in sound. This feature requires a 9V battery to be inserted in a small cavity in the back of the body. On certain legs of My Chemical Romance’s The Black Parade World Tour, the Mikey Way would mainly use this bass for the majority of main sets and even encores during live performances, before replacing this bass with the Geddy Lee Jazz Bass, seen on the far right, as the main bass on later tour legs. In fact, this bass can be seen in the music video for the song “I Don’t Love You”, which is the sixth track off of The Black Parade.

In the middle is a American Standard Precision Bass. This bass has a more simplistic electronic configuration than the Deluxe Jaguar Bass, since it only has passive split Seymour Duncan quarter-pound pickups, one volume and tone knob. This bass also has a rosewood neck like the Jaguar Bass, except the inlays between certain frets on the fingerboard are white dots. Plus, this bass has a string-through body which allows the strings to be strung from underneath, creating more sustain. According to several YouTube videos of My Chemical Romance performing while on The Black Parade World Tour, Mikey Way used this bass specifically for the song “The Sharpest Lives”, since this bass would be tuned to E flat (E♭) standard, and all the other songs were in standard tuning.

The bass on the far right is a Geddy Lee Jazz Bass. This bass is very similar to the Deluxe Jaguar Bass since it has single coil bridge and neck pickups. However, it does not have numerous control switches, nor a 9V preamp system in the back to allow switching from passive to active mode. Plus, this bass has a maple neck and black block inlays between certain frets. Mikey Way mainly used this bass for the majority of main sets and even encores during live performances with My Chemical Romance while on The Black Parade World Tour.

Overall, these are the basses that Mikey Way has played during the era for My Chemical Romance’s album The Black Parade.