This is a sharpie sketch of Sleeping With Sirens bassist Justin Hills’ Ernie Ball Music Man StingRay, Sterling, and Cutlass basses that he has played throughout his entire career in the band. These basses are specifically arranged in the order Justin played them over the course of years when he first started playing Ernie Ball Music Man basses until now. The majority of Justin’s basses are StingRay basses, although his arsenal includes Sterling and Cutlass bass models as well. This piece of music art captures the images of all the Ernie Ball Music Man basses that Justin Hills has played throughout his entire career in Sleeping With Sirens. 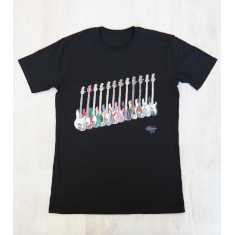 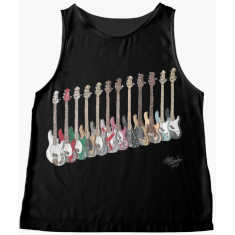 On the 2016 Warped Tour, Justin Hills’ main StingRay basses were the natural maple-necked StingRay and the custom magenta sparkle StingRay with the roasted maple neck and the logo for Sleeping With Sirens, which is a W with a slash. He also had the custom light pink StingRay bass with the painted red X and roasted maple neck as a backup bass. The natural StingRay bass was used for songs in Drop D tuning such as “We Like It Loud”, “Better Off Dead”, and “Go Go Go”, while the custom magenta sparkle StingRay bass was used for songs in Drop C tuning such as “Kick Me”, “Do It Now Remember It Later”, “If I’m James Dean, You’re Audrey Hepburn”, and “If You Can’t Hang”.

The black Ernie Ball Music Man bass with the maple neck behind the custom magenta sparkle StingRay bass is not a StingRay bass, but rather a Sterling bass. Unlike all of Justin Hills’ basses, this bass has two humbucker pickups positioned at the neck and bridge, and a 5-way control switch to change the instrument’s sound and tone. Justin used this bass in 2017 for playing acoustic songs, as well as for the non-acoustic song ‘Cheers’ while on Sleeping With Sirens’ Gossip tour.

Behind the black are two 5-string basses which were both custom-built. First is a 5-string Sterling bass with a natural finish and a roasted maple neck, which was used in 2015 for the song “Fly” since that song uses the low B string. Next is a Classic StingRay 5 bass which also has a roasted maple neck, but does not have a 5-way control switch and two humbucker pickups. The Classic StingRay 5 bass was first used in late 2017 when Sleeping With Sirens supported Rise Against on their 2017 European tour.

The last two basses, which both have maple necks, are Cutlass basses that Justin started playing in 2019. The first one, which is light blue, is not custom and was first used when Sleeping With Sirens supported Good Charlotte on their 2019 European tour in January and February. The next one, which is black and has a white pearloid pickguard and black hardware, is custom-built. It is seen in Sleeping With Sirens’ music video for their new song “Leave It All Behind” off their upcoming album “How It Feels to Be Lost” which drops September 6th. You can see Justin play those basses all summer long with Sleeping With Sirens at Rockstar Energy Drink DISRUPT Festival.

Overall, these are all the Ernie Ball Music Man basses that Justin Hills has played as of now.