This is a sharpie sketch of Sleeping With Sirens bassist Justin Hills’ Ernie Ball Music Man 5-string basses that he has played since 2015. Pictured here are a custom Sterling 5 HH, a custom Classic StingRay 5, and a StingRay5 Special. These basses are specifically arranged in the order Justin received and played them in over the course of four years. 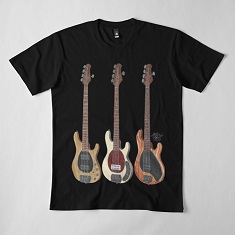 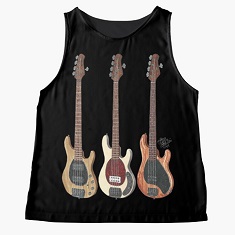 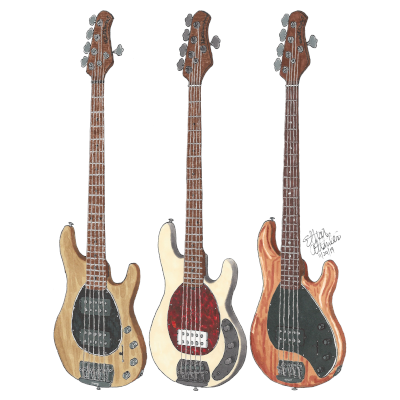 This piece of music art captures the images of these Ernie Ball Music Man 5-string basses that Justin Hills has played throughout his career in Sleeping With Sirens. Justin started playing the custom Ernie Ball Music Man Sterling 5 HH in mid-2015, while touring with Sleeping With Sirens in support of their album Madness, which was released that year. Justin mainly used this bass for the song “Fly”, since that song features a low B string, and 5-string basses are normally tuned BEADG. This bass has two humbuckers and a 5-way control switch for changing the sound between pickups.

In the middle is an Ernie Ball Music Man Classic StingRay 5, which is also custom. Justin Hills first used this bass in late 2017 when Sleeping With Sirens supported Rise Against on their 2017 European tour. As you can see, this bass also has a roasted maple neck like the custom Sterling 5 HH, which is a leading component to making it a custom piece. Another component that makes this bass custom is its aged hardware, such as the bridge, control plate, knobs and tuners. However, it does not have a 5-way control switch and two humbucker pickups. Plus, this bass only has three knobs instead of four, and has 21 frets on the neck instead of 22 if you look closely. Another thing that makes this bass interesting is that it has a string-through body, which allows the strings to be strung from underneath, creating more sustain.

The last Ernie Ball Music Man bass is a StingRay5 Special, which is an enhanced model of the well-known StingRay 5 Bass. This is one of Justin Hills’ newest basses that he started playing around the 4th quarter of 2019. Unlike the other two basses, this bass is not custom. He brought this bass while performing with Sleeping With Sirens on the Threesome Tour with Bring Me The Horizon, as well as their EU/UK headline tour for their latest album How It Feels to Be Lost. He mainly used this bass for songs in Drop A and Drop G tuning, such as “Ghost”, “Blood Lines”, “P.S. Missing You”, and “Medicine (Devil in My Head)”. The bass would be tuned AEADG, but for playing “Blood Lines” which is in Drop G, a drop pedal would be used to detune the bass two semitones down to GDGCF while keeping it in its actual tuning at the same time. Sounds cool, right? Pretty rad.

Overall, these are all the Ernie Ball Music Man 5-string basses that Justin Hills has played as of now.