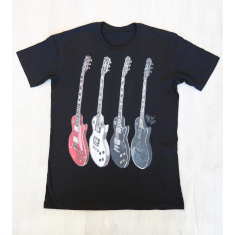 These guitars have ebony fingerboards with abalone inlays between certain frets. However, the red Gibson Les Paul guitar on the left does not have block inlays, but rather trapezoid-shaped inlays. Plus, there is no inlay between the nut and the first fret, unlike the other three Les Paul guitars. These guitars are one-piece guitars, which means they do not have any detachable parts such as the neck, due to the way they were designed and built.