This is a sharpie sketch of All Time Low guitarist Jack Barakat’s American Professional Deluxe ShawBucker Telecasters. These guitars have custom pickguards that accommodate one pickup and one volume knob. They were used during All Time Low’s Last Young Renegade world tour throughout 2017 and 2018. Jack Barakat started playing them in 2017. 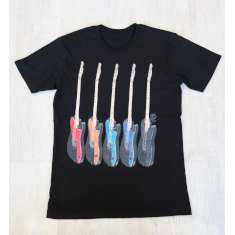 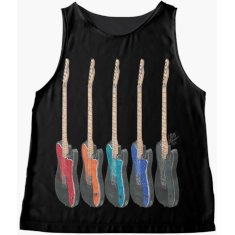 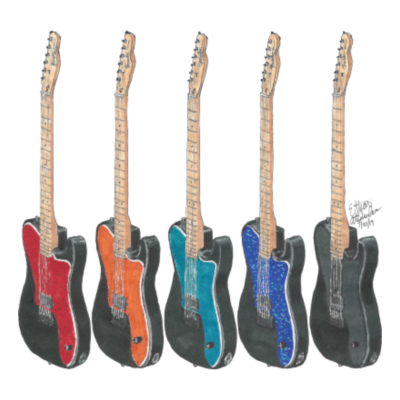 Jack Barakat’s American Professional Deluxe ShawBucker Telecasters were custom-built built by Billy Siegle, artist relations manager at. The guitars themselves are all the same since they have black bodies and maple necks. However, they have different colored pickguards which are red pearloid, anodized gold, turquoise pearloid, blue pearloid, and black. Not only are the pickguards and pickup configurations custom, but the hardware looks as if it is black nickel.

The specific types of hardware such as the bridge, knobs, tuning heads, string guide, and pickups, are not featured on regular American Professional Deluxe ShawBucker Telecasters. For instance, the bridges on these specific Telecasters are American Standard Hardtail Strat Bridges because of the saddle types on the bridge. Plus, the types of volume knobs on these guitars are dome knobs, the tuning heads are locking tuners, and the pickups are ShawBucker 2 pickups with black nickel humbucker covers.